Christina Hutchins’ Tender the Maker won the 2015 May Swenson Award (Utah State University Press). Her other books of poetry are The Stranger Dissolves (Sixteen Rivers Press, 2011), a finalist for the Lambda Poetry Award and Publishing Triangle’s Audre Lorde Prize, and the chapbooks Radiantly We Inhabit the Air (Robin Becker Prize, 2011) and Collecting Light (Acacia Books, 1999). Hutchins  was the 2017 Dartmouth Poet in Residence at the Frost Place in Franconia, NH, where she compiled most of what will be her next book, Minor Achemies. 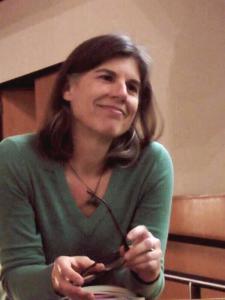 “The motion of a poet’s life enters her or his work, and then, the motion of the coalescing poem further integrates and makes the poet… To constantly reconstitute oneself in relation to one’s world, such that doing so is not something to be feared but a means of engendering joy, that’s what poets get to do, and must do, to remain alive to the coming of poems.”

Hutchins’ poetry has been published in The Antioch Review, Beloit Poetry Journal, Denver Quarterly, The New Republic, Prairie Schooner, Salmagundi, The Southern Review, The Women’s Review of Books and other journals and anthologies, and her scholarly essays appear in volumes by Ashgate, Columbia UP, and SUNY. Literary awards include The Missouri Review Editors’ Prize, National Poetry Review’s Annie Finch Prize, two Barbara Deming/Money for Women Awards, the James D. Phelan Award, and fellowships to Villa Montalvo Center for the Arts in Saratoga CA and Summer Literary Seminars in St. Petersburg, Russia.

Christina lives in Albany, California, where she served as the first poet laureate, teaches private workshops, and offers individual craft consultations. She has worked as a biochemist, a Congregational (UCC) minister, and has taught process theology, philosophies of beauty and critique, and courses on poetry and theological imagination at Pacific School of Religion in Berkeley. She holds a B.S. in Biochemistry from University of California at Davis, an M.Div. from Harvard Divinity School, and an Interdisciplinary Ph.D. from the Graduate Theological Union in Berkeley. While at Harvard, she twice won the Billings Preaching Prize, was named the top graduate as the Thayer Scholar of Divinity, and was elected by her peers to deliver the graduation address.

“I was born and grew up in San Jose, California. In 1961, San Jose’s population was 30,000, and the Santa Clara Valley (once known as The Valley of Hearts’ Delight for the blossom-scent of  thousands of acres of apricots and prune plums) had not yet developed into Silicon Valley. My family moved to Karlsruhe, West Germany from 1964-65. Images in my poems often pass through a psyche shaped by the cobblestones of old cities, by my family’s rugged land in the Santa Cruz mountains, from discoveries engendered by free childhood rambles in the natural world, and amid prowls along the Northern California coast. My father, Bruce Hutchins, was a physicist and a baritone, and my mother, who still lives in San Jose, was for many years a potter. I have two brothers, Dave Hutchins, a biogeochemical oceanographer and USC professor, and Tim Hutchins, a lifelong fly-fishing guide in Yosemite and the high Sierra.”

“As an adult, after living in the Northwest and New England, each with its cherished landscapes, weather, and qualities of light, I returned to the Bay Area in 1992 to serve a liberal congregation in El Cerrito. Subsequently, I entered a Ph.D. program in Berkeley and have continued to live in Albany, directly across from the Golden Gate. I am a hiker and lover of trees. To be fully animate and human, I need to hear the voices of the creek, be out in the storm-air of wild seas, need to swim in cold lakes and remote rivers, to write, to read, to listen, and to teach. Having minored in Piano Performance, I am especially happy when Beethoven, Brahms, Mozart, or Bach arrive full force under my fingers when I’m well-practiced. If I had larger hands, I would play Rachmaninoff. I am presently learning to paint with watercolors.” 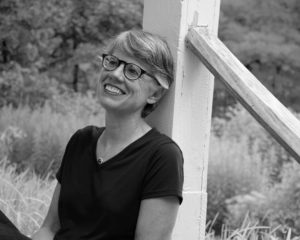